Home / Open files from *MULTIPLE* tabs in Acrobat (or other app)

Firstly, thanks for an awesome piece of software.

Now, as it says on the tin, I’d like to have e.g. 5 pdfs open in Sumatra, and then from the file menu be able to say open ALL pdfs in Acrobat, not just the active pdf.

Could anyone help out with this?

Sounds simple, however I dont think its currently possible, without some scripting to gather the current files open.
You may have seen that “external viewers” can only accept one filename at a time, thus it would require a workflow of say one shortcut to add each (any) active filename at a time to a runtime list then a second trigger to send the list to acrobat.
I would be looking first at how acrobat receives the listing (a long string) ? then use external viewers to build that structure via a cmd file.
Thus you would manually use one shortcut to call the cmd for each desired gather and a second shortcut to send the gathers to acrobat

I am nowhere near an IT guy so that’s a tough nut for me to crack. But let’s assume it remains as a feature request.

OT - could you pls add one more reply to this thread so I can see that the account settings I made actually have taken place. Saying this cos emails weren’t sent at first when replies to the thread were added. Now I tweaked my settings, let’s just see if it works. Thanks in advance!

I can help if you struggle, it should not be too dificult, but its requires work on your part,

my inital testing shows my old acrobat would open a new window for each filename but I guess more recent should use tabs.

Looking at other Acrobat DC users problems, it appears externaly opening multiple files in Acrobat tabs may be a paid for (subscription) feature and/or be a rights management problem across some netorked locations.

SO adding one ExternalViewers command

and a second as

note “some where you want it” should not include odd characters and since the list is continuously added to but not self destroying, you could need to add a third shortcut to destroy an older list or see next post

ALT F A should add the filename to the List

ALT F L should run the List of files

"c:\some where you want it" could be your %temp% folder so in that case replace all of those in both commands as “%temp%\list.cmd”

so the two commands would be

Totally appreciate your effort. Don’t think Im there yet though. So we can just park it here for now and see if it ever makes it to a feature.

and copy & paste the following to replace it

This is what I get 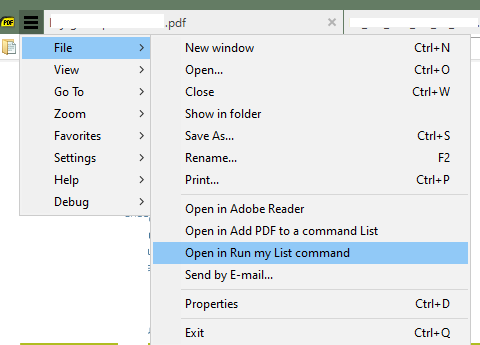 The original one called “Open in Acrobat Reader” still works but ofc opens a single pdf only.

Thank you for your drive.

Apologies just tested Run my list
and agreed did not work as there were two command line= on the same line but should have been just the one,
see how I have now changed above to remove the duplicate

The current list of tabs cant be opened automatically you need to chose each of the tabs to be opened in acrobat, use the shortcut ALT + F + T for each one then finally use ALT + F + L to start the list

The current list of tabs cant be opened automatically you need to chose each of the tabs to be opened in acrobat, use the shortcut ALT + F + T for each one then finally use ALT + F + L to start the list

Wait, did we misunderstand each other … that was the whole point till now. To have e.g. 3 pdfs opened in tabs in Sumatra and then from any single one of them go to File Menu and hit a button to open all 3 (or as many as opened) PDFs in Acrobat windows.

No misunderstanding, SumatraPDF is currently limited to exporting one tab name and / or page number at a time, it could be some time before there is a means to automatically list all current tabs. There have been many long term requests for such a feature.

Hello developers, When the number of pdf files or other documents which are opened are quite high like 10, it is very...

It is not too difficult, as you preview each pdf, to decide which tabs need listing and hit ALT + F + T for each. To make that fully automatic would require much heavier scripting with users requesting “but I want to skip this tab or that tab”.

@koottova
Never one to give up, I think I may have your desired answer, and ALL on One shortcut ALTFT.
Note it can only work in a recent https://www.sumatrapdfreader.org/prerelease.html version unlike the one above it will not work in version 3.2 or earlier.
Beware it is a very long line and the " % and 4 tabs (the big space) are critical since the current session stores the open file names in exactly that fashion.
DO read the notes below that explain how you will need to make two adjustments for YOUR pc

NOTE to anyone copying/pasting the above command, beware when copying command lines that quotes may be changed from required simple double " marks to non working “curly quoted”

When current pre-release is running it keeps track of the current tabs in a TabStates [ area towards the end of the SumatraPDF-settings.txt. This was "not always" the case in previous versions, including 3.2.

So now we can search for the current tabs filenames by looking for those with 4 TAB characters. That is what the “Find” part does, so the big gap infront of “FilePath” is important otherwise it will find other entries not currently open.

Where it says "SEE NOTES\ then YOU need to replace that with the location of the settings file so it might be "C:\users\*your name*\appdata\local\ for a more recent installed pre-release version or if you are using a portable version it could be the folder with the SumatraPDF.exe . The easiest way to check is in Advanced settings using “Save AS” and note where that file is located.

ALSO note where I have put "c:\program files\SumatraPDF\SumatraPDF.exe" as my file handler for the tab set to be reopened you will need to replace that with wherever your acrobat.exe is located . you can usually find that by looking at the properties of an acrobat shortcut.

There are at least two restrictions to avoid with this method

to make this much easier for other uses such as simply save all current tabs to a list or a command list.
in pre-release \ SumatraPDF-settings.txt use a simpler external call, change "some where to a folder of your choice e.g. "c:\my scripts\

If you want to automatically run the list like above then
copy and paste the following in NotePad and save as (without the extension .txt) “some where\CurrentTabs.cmd”

SEE NOTES\ as per above and
the target application\handler.exe could be SumatraPDF

If you dont want to automatically run the list but say save it to use later e.g. to start SumatraPDF with a saved list then copy and paste the following in NotePad and it save as (without the extension .txt)

Thanks for your reply, it seems very complicated. Fortunately, I’ve now discovered how to make favourites. These seem to survive anything! And if I then keep a backup of the settings file, I should be able simply to restore in anyway. Thanks for your post