Home / How to preview .PDF files in Windows Explorer x64 and Outlook x32

I have tried installing and re-installing Adobe Acrobat DC (64 bit).
I then tried both SumatraPDF 64bit and SumatraPDF 32 bit.

This is driving me nuts!

Mixing 32bit Outlook previews and 64bit Explorer previews is a recipe for the disaster of neither working, It may be possible (I think some may have reported eventual success in the past) but highly not recommended.

The recommendation is to ensure that if Windows is 64bit then install a 64bit Outlook.

You could try installing the 32bit preview option to only see them in outlook or just the 64bit one to see them in Explorer.

The prime difficulty you may be facing is multiple previewers of varing bitness fighting as to which one is active and to be applied to the previewer panes.

The best I can suggest is to ensure all traces of the SumatraPDF (and possibly others) are uninstalled then just pick one of the bitness you think would be more useful.

When I uninstall SumatraPDF then the Acrobat XI one takes over responsibility for Previews, I guess If that is uninstalled it then reverts to any native PDF previewer I had before.

Thus when having the Acrobat XI one I would normally not bother using the SumatraPDF one so there is less chance of conflicts.

One of the most versatile Windows Explorer previewers (as against other File Managers which use SumatraPDF full features) is the Tracker one, It used to work with IE and Firefox Browsers but I think that’s no longer possible and you may need a different one for outlook. 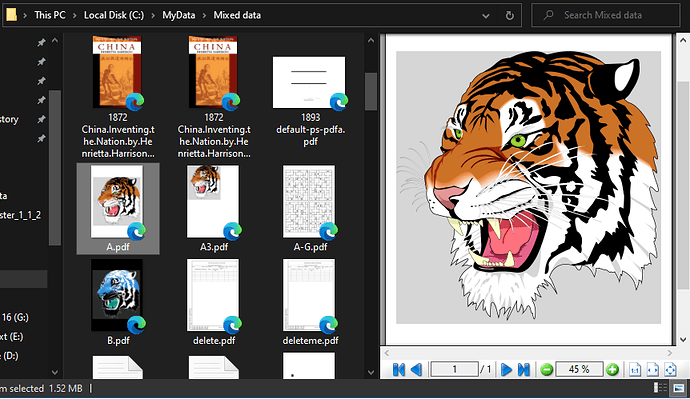 Remember the fuller features, will inevitably require more time to render thus a Full Previewer will naturally be slower in Windows Explorer

This following image is NOT a fault as I am previewing a 222Mb HiRes PDF (Many times over 1GB unpacked) and have aborted after a minute The previewer allows me to jump instantly between files without any lag BUT each large PDF takes minutes to build fully in detail whereas a PNG will simply (in less than a second) display as a thumbnail. 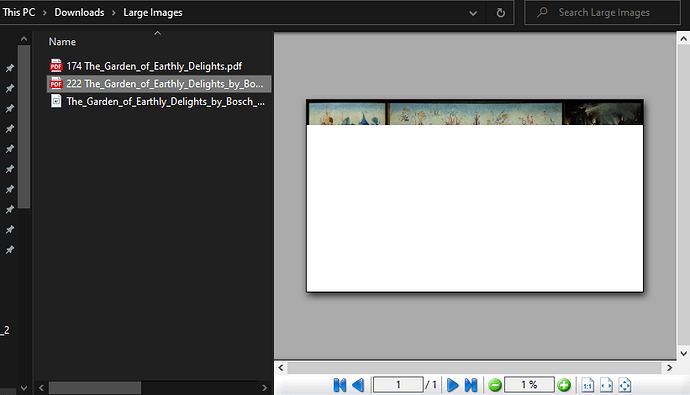 For this reason File Manager “Previews” are best produced as “Thumbnails” for quick scrolling as seen using SumatraPDF Previewer. Then for fuller view/reading open the file in the much more efficient main application.