Home / Discovery of location of the open document

Good afternoon.
When many documents are opened, it would be desirable to open an arrangement of each file. It very strongly would simplify work. I ask for help. Thanks

@user93
Unfortunately SumatraPDF has a limited space for on-screen display of only the last 10 files when you go to File drop-down menu and does not show the file path, however if you press F2 (the rename function) it WILL show the filename and the folder the current file came from.
OR
use CTRLD&CTRLC
if you hold down CTRL its just three keys in total to get the file properties into the clipboard.

and export those entries. Be aware that if remember tabs are set on then there will be two overlapping sets of files, the only difference will be the amount of indentation.

Hope some of that helps

With recent versions 3.2+ there is a new file menu item :-
Show in folder (Shortcut ALTFF NOTE: may vary for other languages)

Shortcut would then be ALTFL 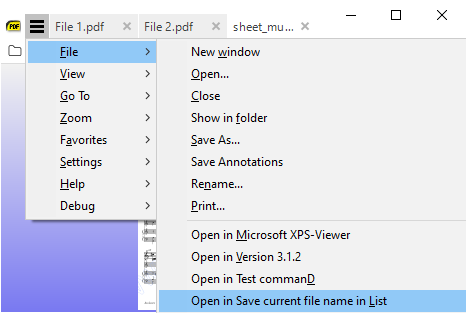 You can be really creative and with slight changes (remove FullFileName = ) make that list of files saved as OpenList.cmd to be run, such as to open those pages next time in SumatraPDF.

@RomanSofyin
the above post has been updated and expanded, thanks for your interest.

It would be useful to “Copy complete file name” (including full path). This would be especially useful for emailing a recently created file. This is an option in another good viewer PDF-XChange Viewer.

It is not documented but you can go to file properties [Ctrl +D] and hit [Ctrl +C] to copy the file details to the clipboard the first line is the full filename (prefixed by the word File:) and that line is what is shown by most one line dialog boxes so is sometimes easy to paste into say explorer OR should work as subject line?. I agree it not ideal as you need to remove the word File: or the additional lines if you paste in an email.

how can I copy the PATH of a book? 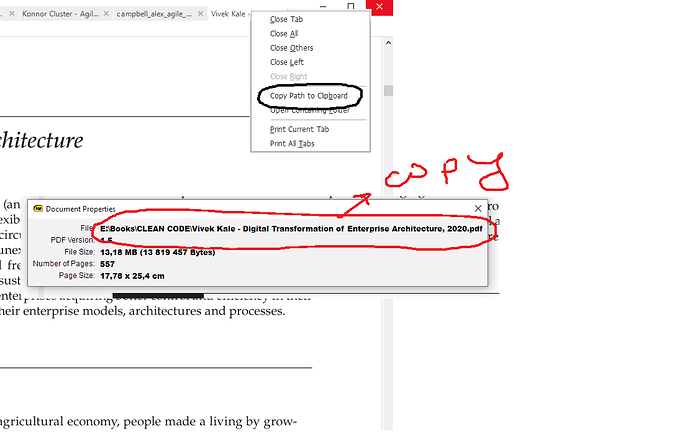 Hello! I appreciate the simplicity of Sumatra, but I think there is one feature that would add value to the end user...